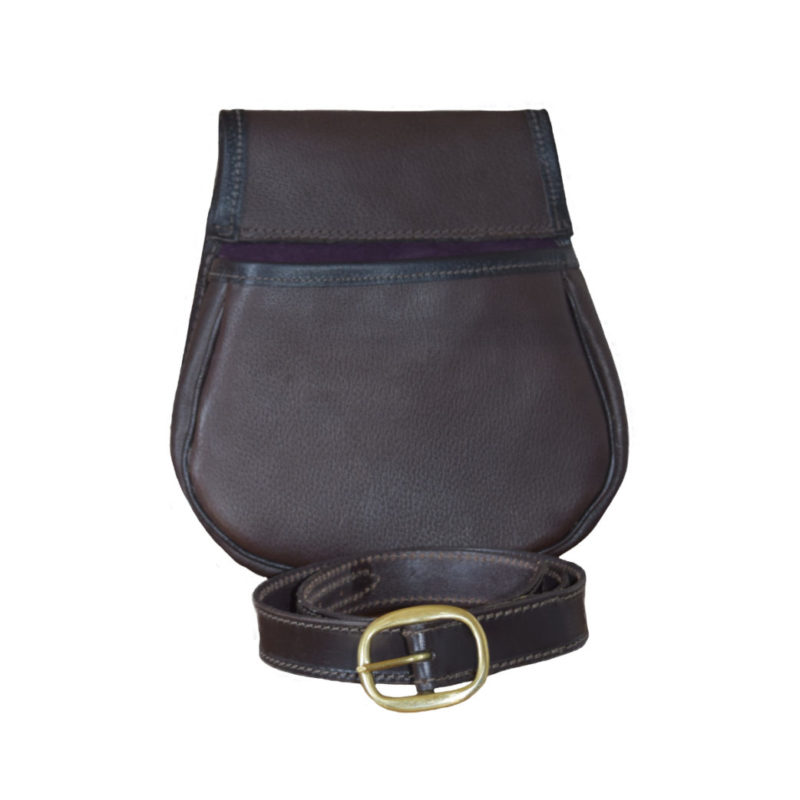 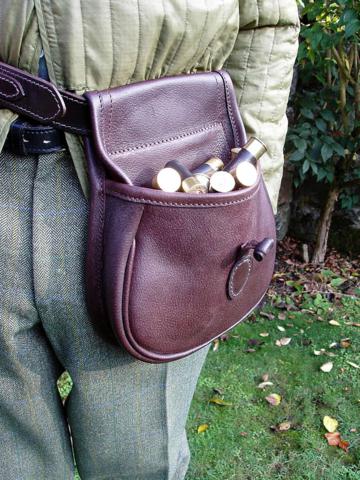 Panniers are a simple way of increasing reloading speed, I offer two sizes each either with a flap or without. Panniers are supplied with a very strong belt, please enter the belt length required.

When measuring yourself for your belt please remember to do so as you will be wearing the item, i.e. over your shooting jacket or vest. The belts are made true to size with the centre hole being the length you request.

During my 30 odd years of service I have had a lot to do with French Shooting Parties and before the double gun era dawned every young french blood would come adorned with one or two BELT PANNIERS. Most guns dont wander far from their peg because they dont want to leave their cartridges behind but much to our annoyance these pannier wearers, stocked up with 80 squibs ( two panniers ), were completely mobile and some made full use of this. By way of explanation – walking away from your peg and chasing birds is fine if you are an end gun, but not if you are in the middle! In those days we often had walking guns and then they were excellent.

Panniers are coming into fashion again and it is easy to see why – they are simplicity itself, you have very easy access to cartridges and they hold sufficient for a normal drive.

We make TWO SIZES of pannier – our LARGE PANNIER  (24 cms across the back) holds 50 x 12 bore shells three quarters full and if you shake it before you start then most will be the right way up when the fun starts.

Our MEDIUM PANNIER (21 cms across the back) holds about 35 x 12 bore squibs. We offer both sizes of pannier either with or without a flap/ lid and with the pannier we supply a heavy duty belt which is quick to take off and put on, so if you wish you can put it into your vehicle between drives.

Our panniers are  made from best quality Dark Havana pigskin lined with a contrasting brushed pigskin and I think they will last forever, they certainly look very handsome.

Opinion seems to be equally divided between the choice of our panniers WITH FLAP or WITHOUT FLAP;  we have designed the WITH FLAP pannier so that when in use the flap will fold neatly out of the way into the back of the pannier behind the cartridges. Of course the advantage of the lid is that when you close the lid with its brass toggle, then the cartridges can not escape between drives.

The WITHOUT FLAP pannier is simplicity itself and I think two of these are probably the answer to the big day, maximum firepower question.

I think these panniers are a smart and efficient product; whether you go for one or two panniers is up to you – I can think of some ambitious young men who would probably go for three!

Included in our price is a substantial belt made from Sedgewicks bridle hide with the holes overlaid by another strip of leather.

I imagine that the MEDIUM pannier will appeal to average users and those shooting 20 and 28 bores – and also to those who will wear two panniers.

I give below the approximate capacities ( 3/4 full ) for both sizes of pannier; I think 28 bore users will be able to work out capacities for themselves.

One final point: it is quite straight forward to wear a single pannier on one of our clip cartridge belts. This combination gives you the ease of reloading from the clip belt (30) and the resevoir (50 squibs) from which to fill up on a decent drive!

Be the first to review “Cartridge Pannier” Cancel reply