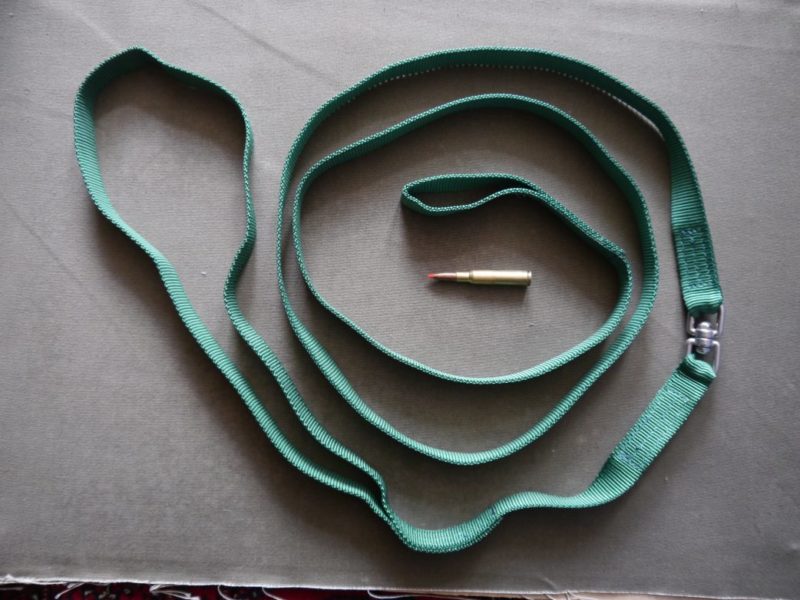 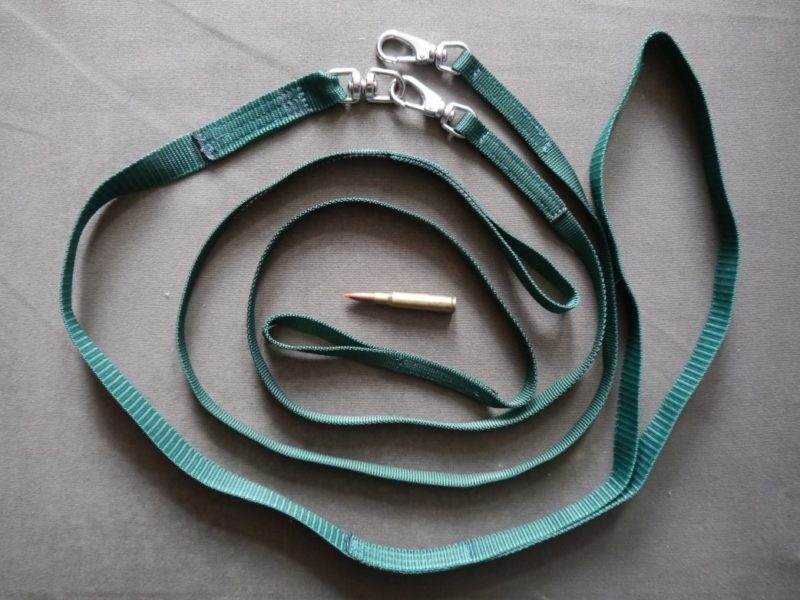 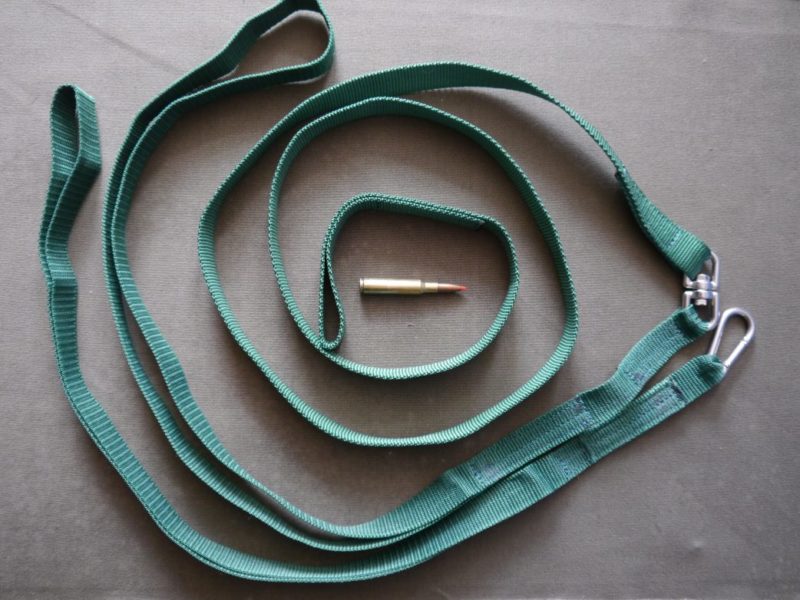 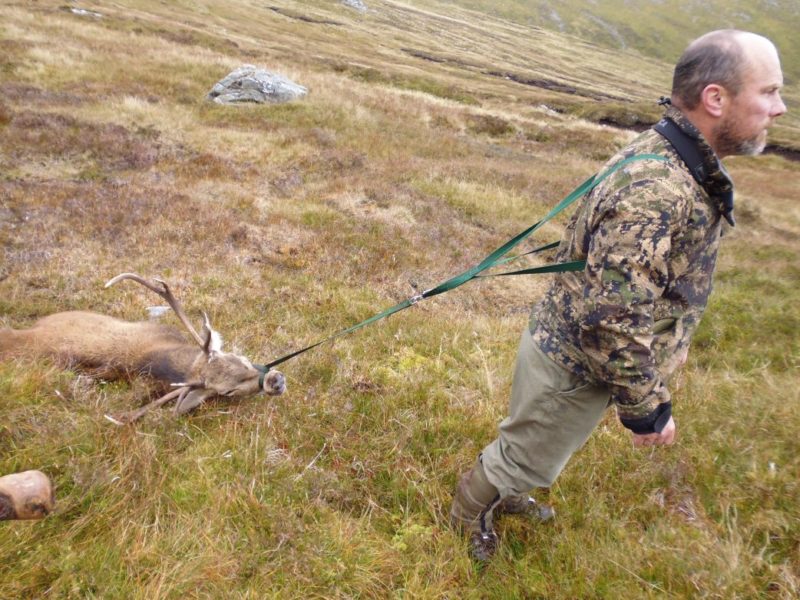 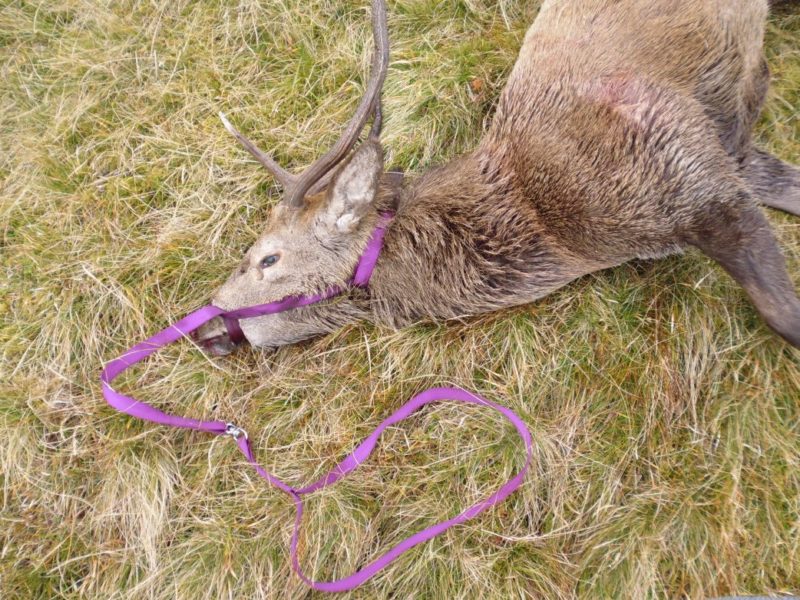 Replacing the traditional manila drag rope these drag straps/ webs are made from very strong dark green polypropylene webbing and marine grade swivels, they are lighter, less bulky and easier to wash out than rope and almost a pleasure to use.

On my stalking trips I am always keen to see how the professional stalkers equipment is evolving, by definition stalkers are eminently practical people and it is fascinating to watch how the clever ones make life easier for themselves. Moving deer carcasses on the hill with drag ropes has happened for centuries, but of course the Argo and ever more sophisticated ( and expensive ) tracked vehicles have sometimes made the length of the drag shorter. However, unless you are very lucky, dragging is still a fact of life and there will be a drag rope in most stalkers pockets. Weight on the hill is almost an obsession and a decent manila drag rope has a certain weight so I have copied Falcon Frost and made a series of drag ropes (webbing/straps) from lightweight dark green heavy duty polypropylene webbing. In comparison to hemp or manila rope these straps are lighter, less bulky and wash out more easily and they seem almost indestructible. The designs of these drag straps were thought out on the hill but of course they are equally usefully in a wood with a fallow buck to consider, so I offer a variety of drag straps to allow for choice to cover different situations.

This drag strap consists of three parts; two separate shoulder loops (each 26″ long) one of which is joined to a stainless swivel which then joins to a single end web with a loop at the end. So one shoulder loop is permanently joined to the swivel; the second shoulder loop has a stainless carabiner which is also attached to the swivel, but this loop can be detached from the top link of the swivel if you wish. This arrangement means that you have a choice to use a strap on both shoulders for maximum effort or one loop can be detached and the other fixed loop used on one shoulder or looped onto a stick. Using only one shoulder loop should give you an escape route in the event of a possible collision if you are going downhill at gathering speed. The overall length of the double stag drag is 104″. The webbing is all 1″ wide heavy duty green polypropolyene .

These hind drag straps are made from the same strong dark green webbing as the stag drag. The difference is that this drag has two thinner ends which allow two beasts (probably a hind and its calf) to be dragged at the same time. The 26″ shoulder loop ( 1″ heavy duty webbing ) is joined to a stainless swivel which is then attached to one or two stainless swivelled clips each with its own 1/2″ webbing ending in a 4″ loop. This arrangement is a light and less bulky dragging system for two beasts and the three marine grade stainless swivels/clips mean that you don’t have to worry about the usual twisting that occurs with normal drag ropes.

This simple drag rope/web/ strap is again made from 1″ heavy duty green polypropolyene webbing with a 26″ shoulder loop at one end, a marine grade swivel in the middle and a long end with a 4″ loop at the end. The overall length is the same as the double drag at 104″. All made in our own workshop.

Be the first to review “Drag Ropes for Deer” Cancel reply 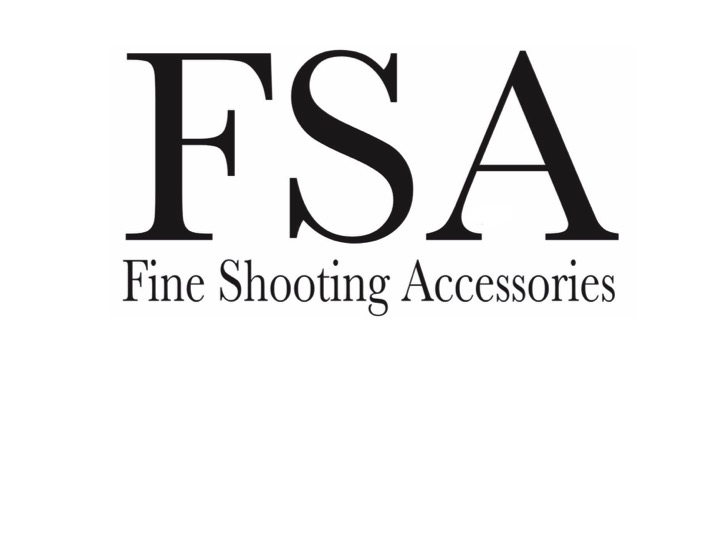